Listen to the chapter below and follow along in the text. Answer the questions at the end!

At the Top of the Cliff

2. (Inference) Why wouldn’t Max be able to climb the cliff?

4. What does Con do when she reaches the top of the cliff? Why?

5. (Retrieve) How was the cliff marked on the map?

7.What did they find at the top of the cliff?

Log onto TTRS to win some points for your team!

A password and a link has been sent to parents via email.

Today we are writing the main part of our newspaper report, this is called the body. 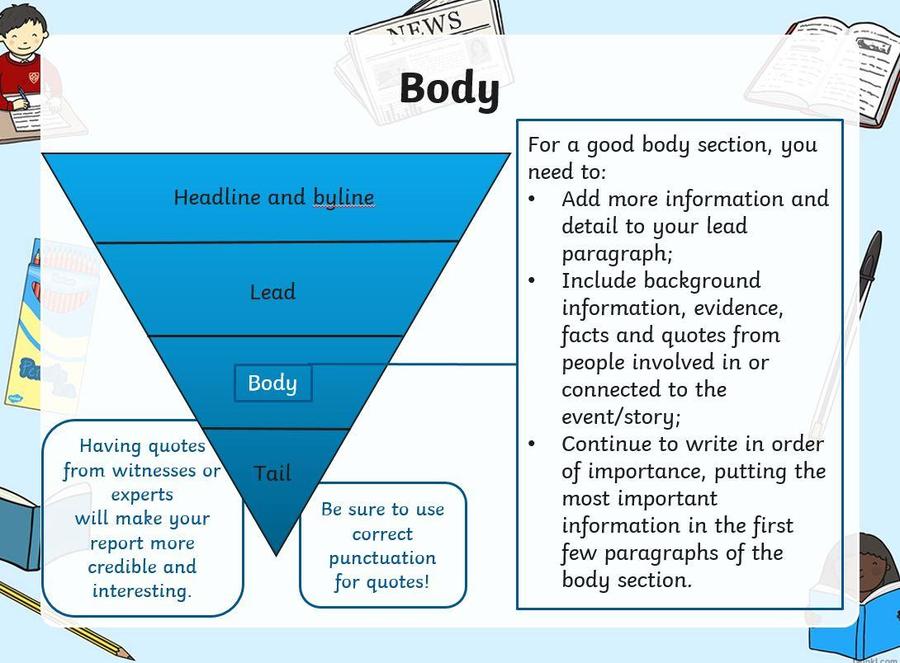 This is where you need to pack out the story with additional information: background information, facts, quotes from family or experts. Don't worry about repeating yourself from the first paragraph, you are telling that story, except packing it out with more detail.

Flight 236 from London was six hours into it's nine hour journey across South America. It is unknown what has happened to the plane, but we have reports from airline staff that the radar system stopped functioning at 4:45 am when the plane was flying across the Amazon Rainforest. Some have speculated that this could be the result of a crash, flight expert and pilot for British Air, Emily Drage said, "This simply must be due to engine failure. There is no other explanation as to why the radar would fail. I fear for the worst, that the plane has crashed into the Amazon rainforest."

Miss Drage's bleak prediction is not shared by the data collected by the US National Transportation Safety Board which found that more than 95% of aircraft occupants survived accidents, including 55% in the most serious incidents.

We spoke to the mother of Lila and Max Smith, who has travelled to South America to join the search efforts for her children, she said, "I can remember the last words I spoke to them; I told them that I loved them and that I would call them when they landed. I'll never forgive myself if something happened to them. I know they are alive, I can tell, I'll never give up."

Miss Smith's optimism was not shared by the Aunt of missing student Con Peters. Speaking to us via Zoom, Mrs Peters (her aunt) said, "I don't know why you're bothering to look, they're almost certainly dead. Con couldn't survive by herself in an apartment in London, she wouldn't last five minutes in the rainforest!"

Local authorities and volunteers have been combing the area since the early hours of Monday morning. Local resident, Nicola Lydon said, "We have a duty to search for these poor, missing children. The Amazon is a dangerous place, we need to find them fast."

The CEO of Manaus Airlines, Jeff Mackie, was quick to refuse any responsibility for the incident, speaking to us via telephone, he told us, "I don't know why people think our planes are unsafe, they're the safest in the world. 52% of the time 100% of our passengers fly to their destinations safely and without incident." Local police have refused to issue a statement and to inform us whether Manaus Airlines is under investigation.

Link and password has been emailed to parents email address.